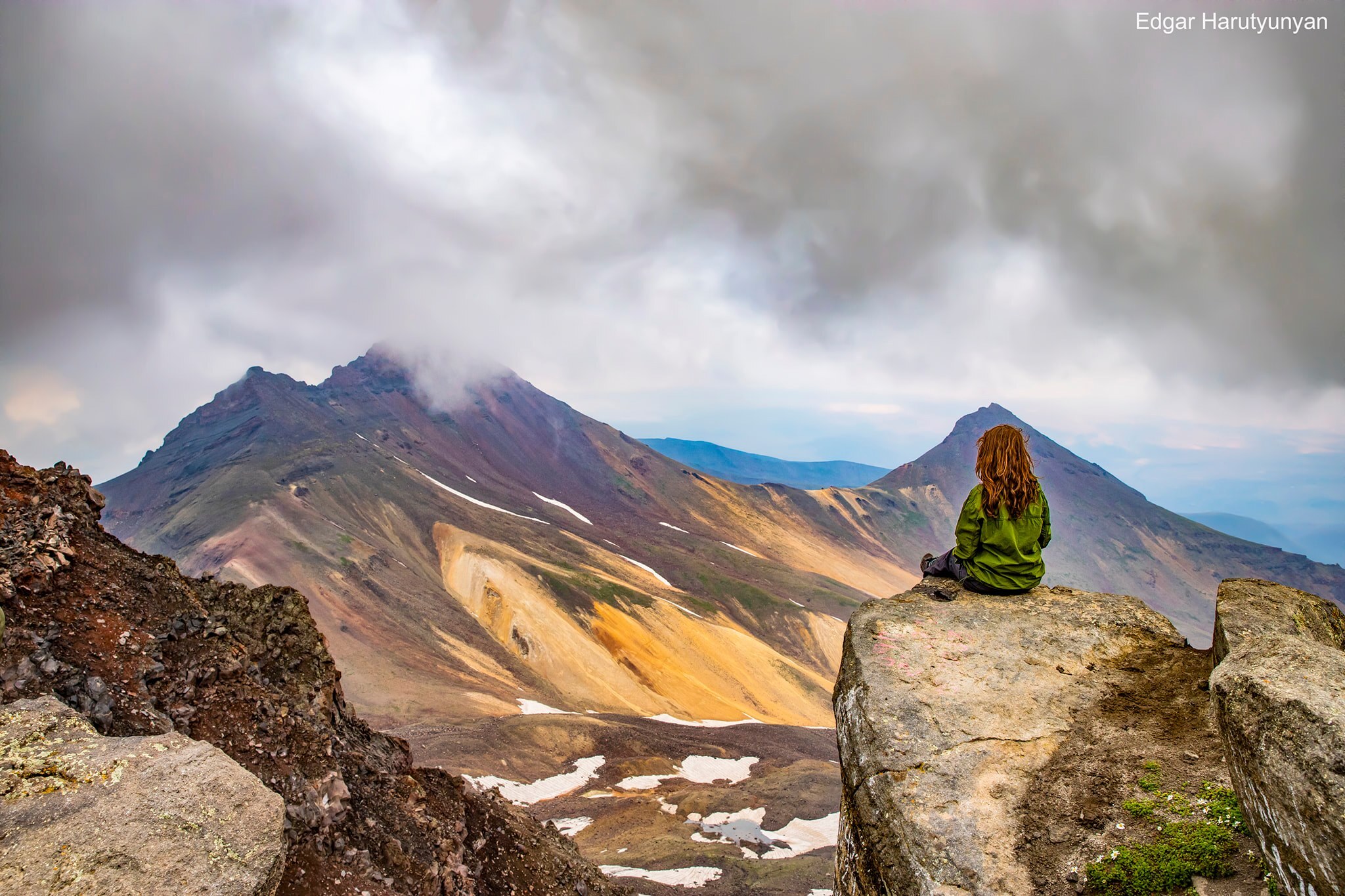 Aragats has 4 peaks, the most famous are the South peak and North peak, the Southern peak is famous for its easy accessibility, and the Northern peak for being the highest point of Armenia. The view from all the peaks are similar. This is the classic trail from Kari Lake to the highest peak of Aragats (North) which is a total of 16km (up and down). (There is also other trail to North peak from Aragats village)

What you should know about Aragats North Peak

What you should know before spending a night at Kari Lake 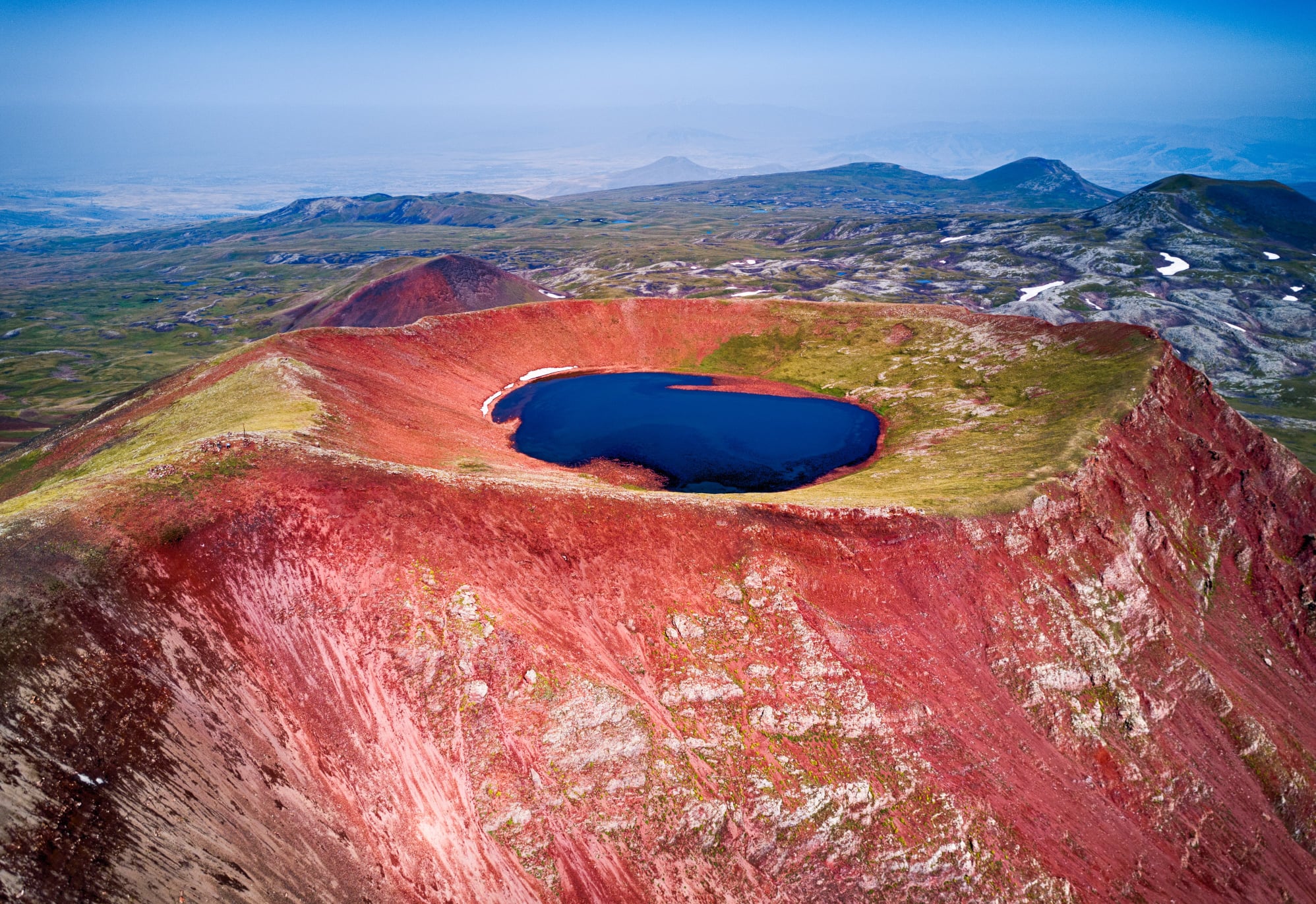 Mount Azdhdahak is the highest summit of Geghama Mountains and is located on the border between Kotayk and Gegharkunik regions. The summit consists of an volcanic cone with a crater that is 50m deep and 500m circumference. The summit also features a beautiful lake that is approximately 3597m high.

Reach the Geghard village by car or bus and continue your  way on off-road truck to the bottom of Mount Paytasar. From that point start your ascent to peak of Mount Azhdahak. During the hike, you will also see lake Vanki, petroglyphs of Geghama mountains and Vishapakars (dragon stones). The length of the route is 12km (one way), altitude gain is 600m. Because it can be a long day to hike up the mountain and back, there are various resources to use in order to get a ride up the beginning section above Geghard village. One of our trusted guides Tigran Simonyan can help or you can get a full vehicle tour through our friends at Highland Hostel & tours if that is what you are looking for. Various other tour companies provide hiking tours with transport included such as ArmGeo and ArmLand. 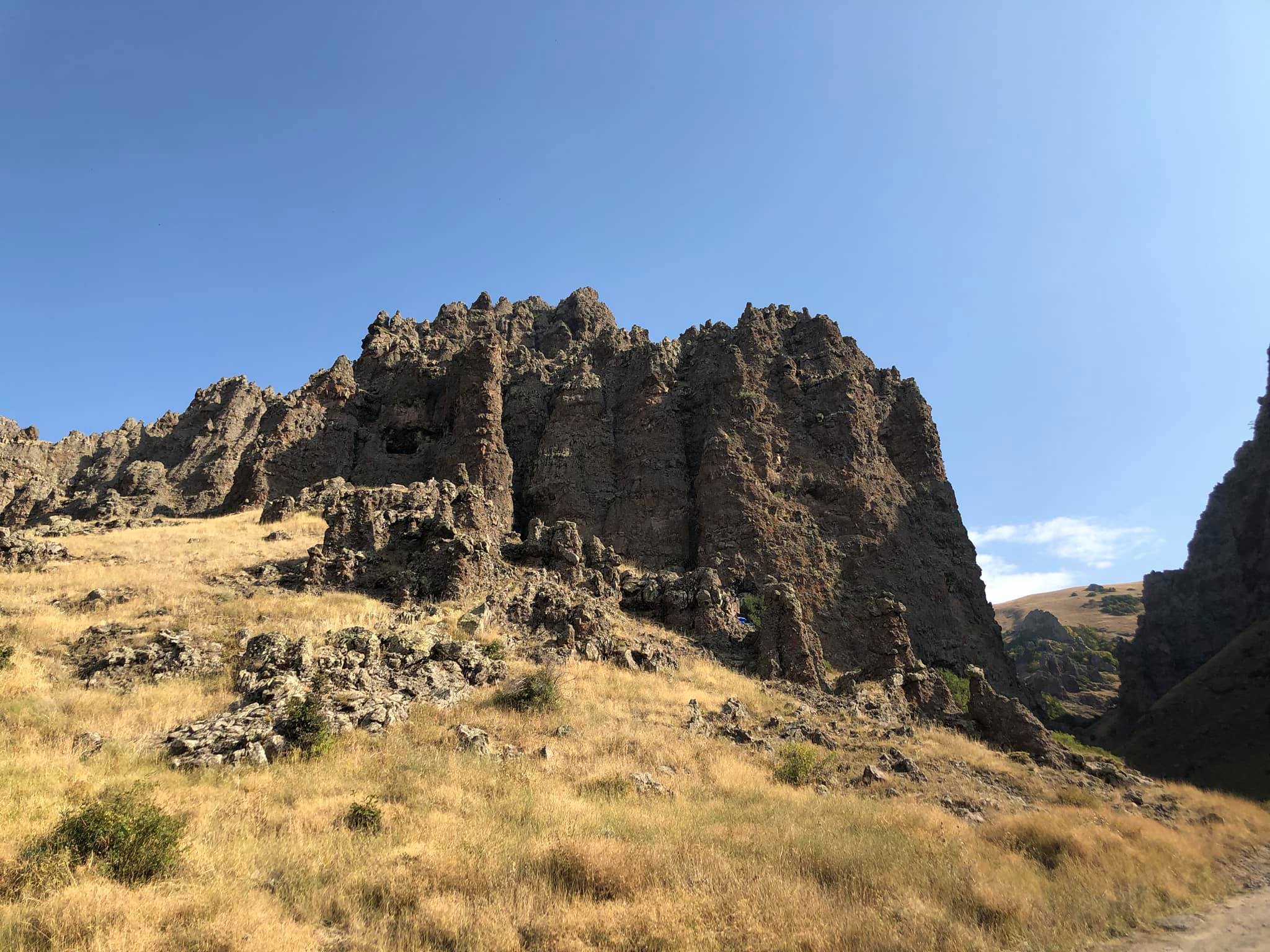 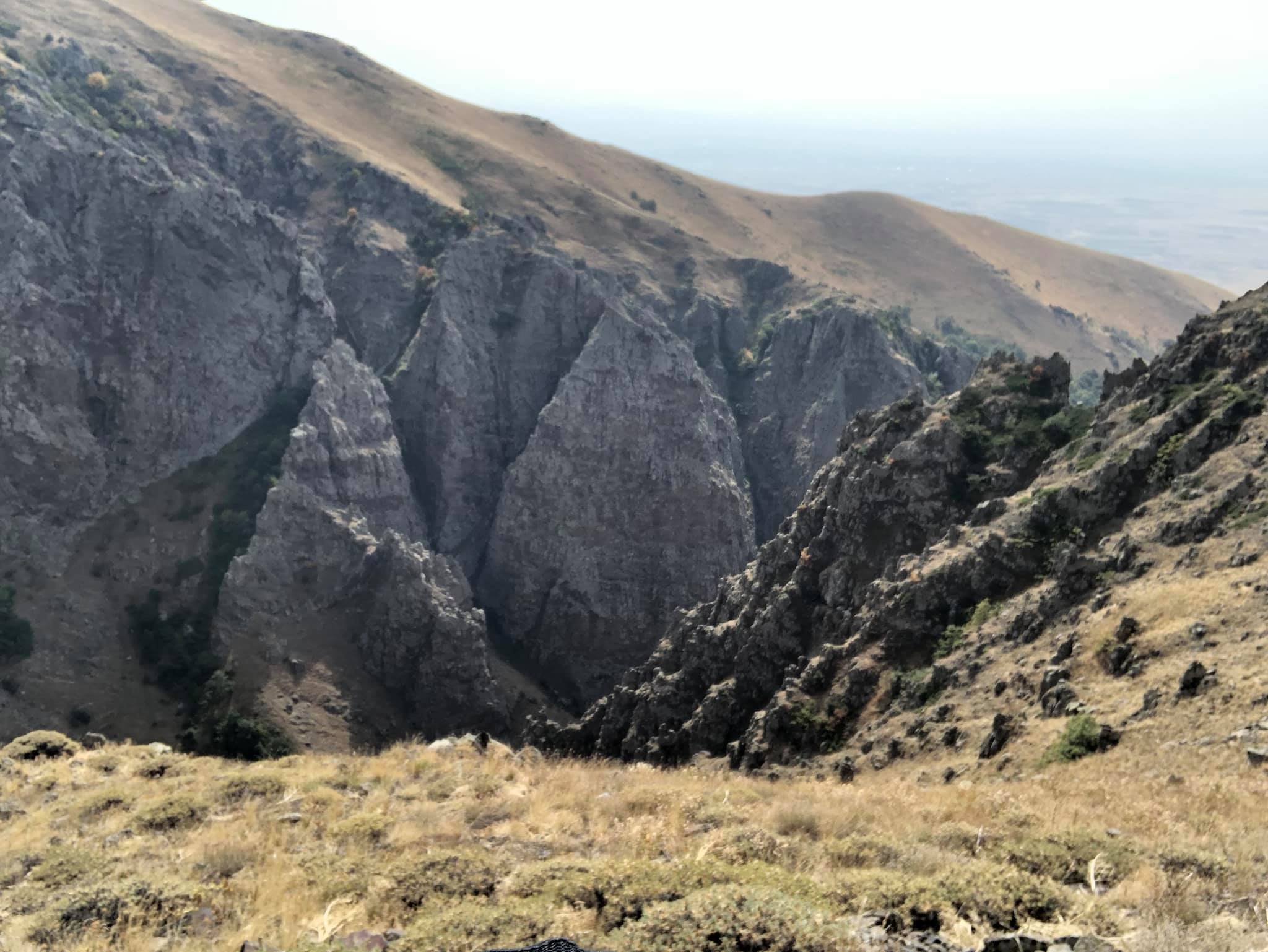 Mount Ara (2605m) is a dormant volcano and located in Kotayk province between the rivers Kasakh and Hrazdan, and is distinguished by an irregular cone shape with truncated summit and a natural fracture in its southwestern section.

The mountain is composed of volcanic rock and its slopes are broken-up deep crevasses.  When you look at the mountain from a distance it really looks like a lying man with hands crossed on his chest. The climate is continental, with annual average precipitation of 300-400mm. The northern slope of the mountain is well covered by forests.

You should start the ascent from the road leading to Tsaghkevank monastery. The length of the route is 10 km and the altitude gain is 800m.

This massif is located in Syunik region, 9km southwest of the city of Kapan. The mountain is richly covered with alpine meadow vegetation and the northeastern slopes are wooded.  The mountain is composed of a chalk volcanic rock and a sedimentary subsurface of porphyrite, marlstone and limestone. In winter, the weather here is particularly stormy. The slopes are fragmented. Snowmelt on the mountain gives rise to hundreds of springs and rivulets, from which the Vachagan river originates.
Starting from Baghaburj, follow the 4x4 track up out of the village and along the ridge, dipping in and out of dense woodland. Though this track can get muddy, it’s well-used and easy to follow. Just above the treeline on the south-facing hillside below the ridge sits the seasonal farming hamlet of Storot, which means either “foot” or “base” in Armenian. From here, there are several trails leading to more remote farms, but you’ll instead head up through Storot until you reach a flat area on the edge shoulder, just above the highest cottage and near a drinking water source. Storot is the closest off-road vehicle access point from Kapan to Mount Khustup’s summit, and thus serves as a basecamp for those hikers wishing to hike up to the summit in a day. You camp here for the night, or take a 4x4 to Kapan for overnight accommodations.

The final stretch of the Legends Trail takes hikers up to Mount Khustup’s summit and back to Storot. Though the path is relatively easy to follow, pay close attention to navigation if visibility is low as you can get seriously lost in the fog. Exposure to the elements as well as an oftentimes inhospitable terrain and the steep nature of the path all make for a challenging hike. But with preparation and motivation, this last trek should be both enjoyable and visually rewarding.

The first half of the climb continues along the same ridge used to reach Storot, just on a narrower path. You’ll pass through rock formations before reaching a spring, at which point the trail grows steeper and steeper. You’ll soon notice that here above the tree-line, the environment shifts towards treeless meadows characteristic of high-alpine steppes. A second spring can be found about 50 meters south of the trail, before you reach the main ridge south of the summit. As you reach the main ridge, you’ll see a 4x4 track coming from the village of Shishkert. Climb north up the ridge to the peak base. To reach the very top of the mountain, you’ll have to scramble, quite literally, up the jagged rocks.
If you’d rather head to Shishkert instead of retracing your steps back down to Kapan, descend the ridge south and follow the 4x4 track you saw earlier 10km down. Keep in mind though that the village has no services and is a 50km trip back to Kapan. 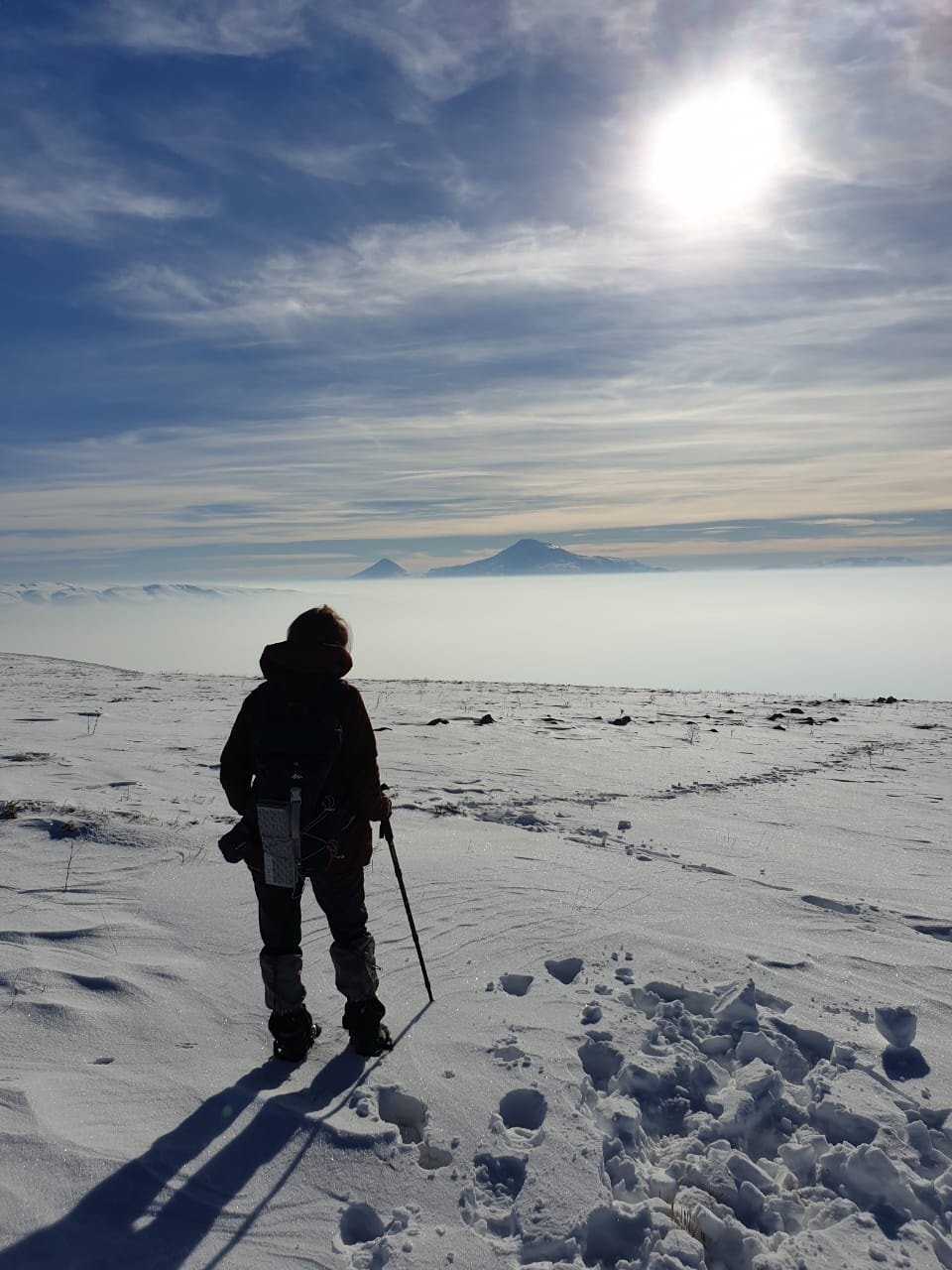 Mount Hatis (2528m) is located in Kotayk region about 2.5km southeast of village of Kaputan. Hatis is cone- shaped mountain with an altitude of 2528m, with slopes covered in alpine meadow vegetation and broken up by crevasses. The Karasunakn springs located at the southern foot of the mountain, are the source of the first ever water piped into the city of Yerevan. An aqueduct was built there in 1912.

Start your hike from the village Kotayq. The length of the route is 11km and the altitude gain is 1000m.